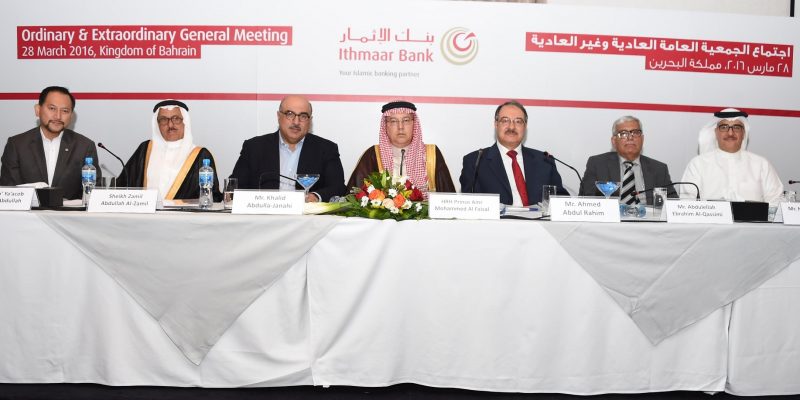 28 Mar 2016
MANAMA, BAHRAIN – 28 March 2016 –Shareholders of Ithmaar Bank, a Bahrain-based Islamic retail bank, today approved (ed note: 28/03/16) plans for a new group structure designed to further develop the growth achieved in the core retail banking business, the strategic focus of the Bank.
The plans, which were proposed by the Ithmaar Bank Board of Directors, and are subject to regulatory approvals, involve the creation of a new holding company that will be listed on the Bahrain Bourse and the Kuwait Stock Exchange and licensed and regulated by the Central Bank of Bahrain (CBB). The new holding company will retain 100 percent ownership of all assets presently owned by Ithmaar Bank. These assets will be allocated into two wholly owned subsidiaries, an Islamic retail bank subsidiary which will hold the core retail banking business, and an investment subsidiary which will hold the investment assets. These two subsidiaries will also be licensed and regulated by the CBB.
The announcement was made by Ithmaar Bank Chairman, His Royal Highness Prince Amr Al Faisal following the Bank’s Extraordinary General Meeting (EGM) with shareholders which followed the Annual General Meeting (AGM). Also present at the meetings, which were held at the Ramee Grand Hotel in Bahrain, were Directors and members of the Ithmaar Bank Executive Management team, representatives of the Bank’s Sharia Supervisory Board, the CBB, the Ministry of Industry and Commerce, statutory auditors PricewaterhouseCoopers, and the Bahrain Bourse.
“On behalf of the Board of Directors, I am pleased to announce that the strategic decisions we took early in 2014, which were designed to significantly transform the Group’s operations, are continuing to deliver positive results, and the new group structure is the next key step in this transformation,” said HRH Prince Amr. “This new structure is designed to assist in realising our long-term strategy for growth by providing greater insight into the strength of our core retail banking operations and further facilitating the management of the Group’s investment assets,” he said.
“This new group structure follows extensive internal review and discussions, and is driven by our commitment to ensuring we are well positioned to benefit from new opportunities in the current market,” said HRH Prince Amr. “The new structure will help lower the risk profile of the new banking entity and enhance shareholder value by showing the growth and improved performance achieved in the core business. In the current structure, this growth is being adversely impacted by investment valuations and impairment provisions,” he said.
Ithmaar Bank Chief Executive Officer, Ahmed Abdul Rahim, who delivered a detailed presentation to shareholders, said these plans build upon the significant improvements achieved due to the implementation of the key strategic decisions taken by the Board of Directors in 2014.
“The key decisions, which included initiatives for increased revenue, improved margins, the divestment of non-core assets, and cost reductions across the Ithmaar Group have, together with the continued growth of our core retail business, contributed in a big way to the Bank’s continuously improving financial performance,” said Abdul Rahim.
“The 2015 financial results, approved on 28 February 2016, reconfirm that our efforts to significantly transform the Group’s operations and focus on developing our core business are paying off, and that we are on the right track,” said Abdul Rahim. “Our decision to reorganise the Group represents a further stage in this process, and underlines our commitment to becoming one of the region’s leading Islamic retail banks,” he said.
“By allocating our assets into separate subsidiaries, we will be able to better focus on our core retail banking businesses held in the new banking entity, including Faysal Bank Limited, Pakistan, a retail and corporate banking subsidiary of Ithmaar Bank. At the same time, we will be able to facilitate independent and focussed disposal of investment assets held by the investment entity, when suitable opportunities arise,” said Abdul Rahim. “This new group structure will further consolidate Ithmaar Bank’s position as a strong retail-focussed premier Islamic retail bank under the Ithmaar brand, better allowing the Bank to take advantage of new growth opportunities, and help to generate greater value to our shareholders,” he said.
During 2015, Ithmaar Bank’s pioneering association with Eskan Bank continued to contribute to addressing the Kingdom’s housing challenges by offering Bahraini citizens government-subsidised financing through Ithmaar Bank to help them buy their first homes as part of a national scheme. Ithmaar Bank also signed an agreement with Tamkeen, a Bahrain semi-government organisation which works to make the private sector the key driver of sustainable economic development, and substantially increased its allocation to the joint Ithmaar-Tamkeen enterprise finance scheme portfolio. In 2015, to mark the Holy Month of Ramadan, Ithmaar Bank launched a first of its kind Qard Hasan (profit-free financing) for low income loyal customers and, later in the year, also introduced Bahrain’s most rewarding Credit Cards loyalty programme, Ithmaar Rewards.
During 2016, Ithmaar Bank continuing to expand its retail banking network, already one of the largest in Bahrain, and will shortly inaugurate a new, full-service branch in Galali – its eighteenth branch in the Kingdom. Ithmaar Bank is also in the process of adding two new ATMs, bringing the total number of ATMs to 48.