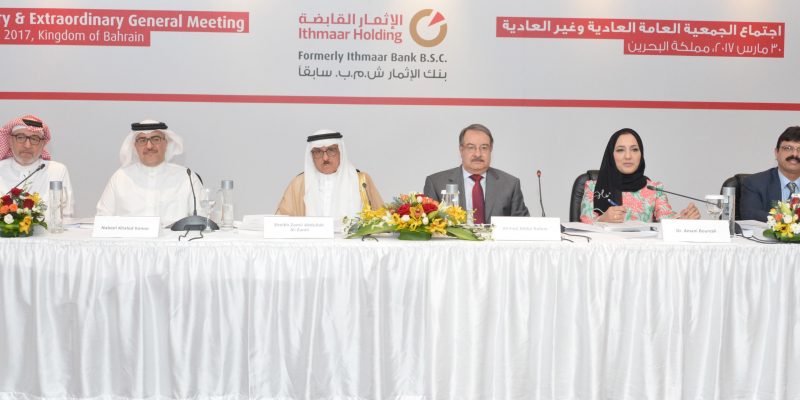 MANAMA, BAHRAIN – 02 April 2017 –Ithmaar Holding B.S.C. (formerly Ithmaar Bank B.S.C.) (Ithmaar) shareholders approved a proposal on listing Ithmaar on additional stock exchanges in the region.
The proposal, which was presented by a shareholder as an additional agenda item at the Annual General Meeting (AGM) held on Thursday (ed note: 30/03/17), was approved unopposed by the shareholders who welcomed the initiative.
Ithmaar Holding, which is licensed and regulated by the Central Bank of Bahrain, is currently listed on the Bahrain Bourse and Boursa Kuwait. At the Thursday meeting, shareholders authorised the Board of Directors and Ithmaar management to study additional listings in various stock exchanges in the region and to complete the additional exchange listing process.
The meeting was chaired by Ithmaar Holding Board member Sheikh Zamil Abdulla Al-Zamil and attended by Directors Dr. Amani Khaled Bouresli and Nabeel Khaled Mohamed Kanoo, as well as Ithmaar Holding Chief Executive Officer, Ahmed Abdul Rahim, Ithmaar Bank Chief Operating Officer, Ravindra Khot, and Ithmaar Bank General Manager, Banking Group, Abdul Hakeem Khalil Al-Mutawa. Also present were members of the Ithmaar Bank Executive Management team, as well as representatives of the Ithmaar Holding Sharia Supervisory Board, the Central Bank of Bahrain (CBB), the Ministry of Industry, Commerce and Tourism, statutory auditors PricewaterhouseCoopers, and the Bahrain Bourse.
At the meeting, shareholders praised the transformation witnessed in 2016 with the successful completion of a major reorganisation as well as a complete turnaround in Ithmaar’s financial performance. The reorganised Ithmaar became fully operational with the start of 2017, concluding the full implementation of plans for a new group structure that was designed to provide greater insight into the strength of the core retail banking operations and further facilitate the focused management of investment and non-core assets. As a result of its focus on core retail banking business, Ithmaar reported a net profit of US$13.80 million for 2016, compared to a US$46.40 million net loss reported for 2015. Net profit attributable to equity holders for the year ended 31 December 2016 was US$3.28 million, compared to a net loss US$60.80 million reported for 2015.
-ENDS-