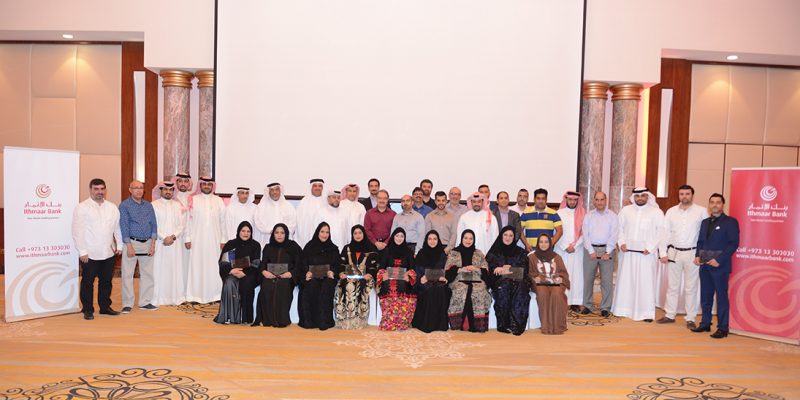 Speaking at the Gathering, Ithmaar Bank Chief Executive Officer Ahmed Abdul Rahim paid rich tribute to the employees, describing them as the Bank’s most valuable assets, and stressing that their dedicated efforts contribute directly to the Bank’s continued success.

Abdul Rahim said the Annual Gathering is part of the Bank’s long-standing philosophy of bringing employees together and continuously working to further developing close working relationships across the board.

“This is an opportunity for us to get to know each other on a more personal and less formal basis,” said Abdul Rahim. “It is an opportunity to transcend the corporate hierarchy and strengthen interpersonal relationships,” he said.

“It is also an opportunity to reinforce our long standing commitment to further developing our merit-based culture of employee excellence,” said Abdul Rahim. “This helps develop our youth positions for future leadership positions,” he said.

In a brief speech he delivered at the Gathering, Abdul Rahim also stressed Ithmaar Bank’s commitment to empowering female employees and ensuring equal opportunities for all. He also thanked the long-serving employees for their dedication, particularly Khalid Abdulrahman Abdulla Hasan who have completed 30 years of service.

“It has not been an easy year for us, but with the grace and blessings of the Almighty, followed by the dedication, focus and loyalty of Ithmaar employees, we are on the road to success,” said Abdul Rahim. “Our core business continues to do consistently well, with Retail Banking reporting dramatic growth in financing assets and in customer deposits, as well as a huge increase in the number of new customers. In fact, our market share, as benchmarked against the statistics of the Central Bank of Bahrain, show gains on all key Retail banking product offerings – current accounts, home financing, auto financing and personal financing. Our other lines of business are also progressing well, with Commercial and International banking continuing to break new grounds,” he said.

The Gathering, which was hosted at the Diplomat Bahrain was attended by almost 300 employees from the Bank’s various departments.

“At Ithmaar Bank, we have long maintained that, ultimately, it is the quality of our people that drives our success,” said Ithmaar Bank Head of Human Resources, Enas Rahimi. “Consequently, Ithmaar Bank invests in developing long-term relationships with each employee, celebrating their achievements, and rewarding their commitment and dedication,” she said.

“The fact that so many of our employees have been with us for so long is, I believe, testimony to the success of our commitment to our employees,” said Rahimi. “These employees helped build Ithmaar Bank into what it is today and will help drive our continued success,” she said.