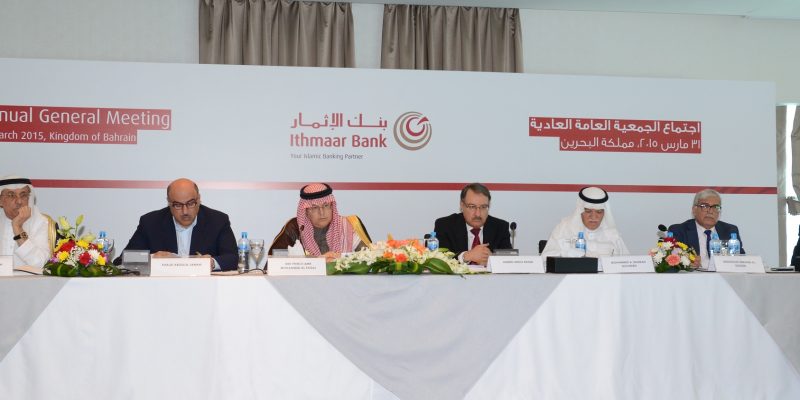 01 Apr 2015
MANAMA, BAHRAIN – 31 March 2015 – Ithmaar Bank, a Bahrain-based Islamic retail bank, announced today (ed note: 31/03/15) that the strategic decisions taken by the Bank’s Board of Directors early in 2014 have already started yielding results. The decisions, which aimed at turning the Ithmaar Group around by significantly transforming operations, included initiatives for increased revenue, improved margins, divestment of non-core assets and cost reductions across the Group.
The announcement was made by the Ithmaar Bank Chairman, His Royal Highness Prince Amr Al Faisal, to the Bank’s shareholders at the Annual General Meeting (AGM) that was hosted at the Ramee Grand Hotel in Bahrain. Also present were Directors, members of the Ithmaar executive management team as well as representatives of the Bank’s Sharia Supervisory Board, the Central Bank of Bahrain, the Ministry of Industry and Commerce, statutory auditors PricewaterhouseCoopers, and the Bahrain Bourse.
“The immediate implementation of these strategic initiatives, coupled with the consistent growth of Ithmaar Bank’s core business has, despite challenging local, regional and international market conditions, contributed to improving the Bank’s performance in 2014,” said HRH Prince Amr. “As a result, Ithmaar Bank reported net profit before impairment provision and taxation of US$ 28.9 million for 2014, compared to only US$ 4.8 million profit for 2013. The net loss after impairment provision and taxation attributable to shareholders of US$ 15 million is significantly lower by 81% compared to US$ 80.3 million for 2013,” he said.
“This improved financial performance is mainly due to sustainable growth in Ithmaar Bank’s core retail banking operations, as is evident in the significant growth of the Bank’s operating income which increased by 14 percent to US$ 227.7 million in 2014, from US$ 199.9 million in 2013,” said HRH Prince Amr. “Despite growth in business, total expenses for the year ended 31 December 2014, at US$198.8 million, are under control and are 1.9 percent higher than 2013 expenses of US$195.1 million. Ithmaar Bank’s balance sheet also continues to be stable, with total assets increasing by six percent to US$ 7.86 billion as at 31 December 2014, compared to US$ 7.4 billion as at 31 December 2013. “The increase in customer balances reflects growing customer confidence in the Bank, as well as demand for its products and services,” he said.
“This transformation is, in a large part, a result of the strategic decisions taken by the Ithmaar Bank Board of Directors earlier in 2014,” said HRH Prince Amr. “The benefits of these initiatives will continue in 2015 and beyond,” he said.
The AGM welcomed the improved performance, and said the Bank is clearly working towards realising the shared vision of becoming the region’s premier Islamic retail bank. At the AGM, shareholders also voted to adopt the proposed Staff Variable Remuneration Policy Framework, which was developed to comply with the Sound Remuneration Practices issued by the Central Bank of Bahrain.
Ithmaar Bank Chief Executive Officer, Ahmed Abdul Rahim, said the Bank’s 2014 financial performance indicates that efforts to turn the group around are clearly paying off, as evident from the growth in the operating profits of 14 percent.
“This growth is a result of the Bank’s commitment to listening closely to its customers, and working to realise their aspirations by continuously improving its products and services,” said Abdul Rahim. “In 2014, for example, Ithmaar Bank introduced a full suite of new credit card solutions from MasterCard, substantially enhanced its popular prize-based savings account, Thimaar, and created new home, personal and auto finance products designed specifically to meet customer requirements,” he said.
Ithmaar Bank operates one of the largest retail banking networks in Bahrain with 46 ATMs and 17 full-service branches, while our key subsidiary, FBL, with its 274 branches across all cities in Pakistan, is amongst the top 10 banks in Pakistan.
“In 2014, Ithmaar Bank also signed a partnership agreement with Bahrain’s Ministry of Housing and Eskan Bank to help overcome the Kingdom’s housing challenges,” said Abdul Rahim. “Under the agreement, Bahraini citizens will be offered government-subsidised financing through Ithmaar Bank to help them buy their first homes as part of a national scheme designed to help overcome the Kingdom’s housing challenges. The Social Housing Financing Scheme allows eligible citizens to finance their first homes through Ithmaar Bank by paying 25 percent of their monthly income towards the property’s monthly instalment with the rest being paid for by the Ministry of Housing through Eskan Bank,’ he said.
“These initiatives helped drive the continued growth in the Bank’s Bahrain retail banking business in 2014,” said Abdul Rahim. “Ithmaar Bank’s financing business in Bahrain, for example, increased by 23 percent, from US$745 million at the end of 2013, to US$914 million at the end of 2014. This growth in 2014 was driven mainly by Home Financing which increased by 53 percent and Personal Financing which increased by 21 percent. Similarly, total customer current accounts, savings accounts, Thimaar and URIA deposits, increased by 11 percent in 2014, from US$1.38 billion at the end of 2013, to US$1.54 billion at the end of 2014,” he said.
-ENDS-