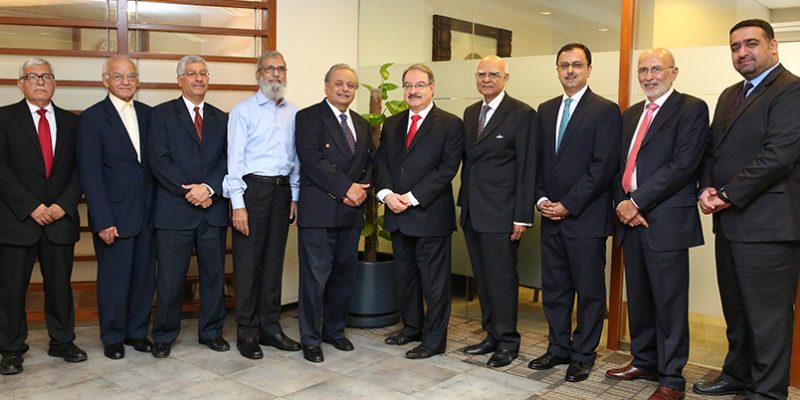 MANAMA, BAHRAIN – 13 December 2017– Ithmaar Bank, a Bahrain-based Islamic retail bank, announced today (ed note: 13/12/17) that its retail banking subsidiary in Pakistan, Faysal Bank Limited (FBL), has maintained growth momentum and reported increased net profits.
Ithmaar Bank owns 66.6 percent of FBL which is listed on the Pakistan Stock Exchange and is mainly engaged in corporate, commercial, retail and consumer banking activities. Ithmaar Bank is a wholly-owned subsidiary of Ithmaar Holding (Ithmaar Group).
The announcement, by Ithmaar Group Chief Executive Officer and FBL Vice Chairman, Ahmed Abdul Rahim, follows the review and approval by the FBL Board of Directors of the financial results for the nine months ending September 30, 2017.
“I am pleased to announce that FBL registered a profit after tax of US$36.3 million (PKR 3.83 billion) during the first nine months of 2017, compared to a profit of US$35.5 million (PKR 3.75 billion) during the corresponding period in 2016,” said Abdul Rahim. “I am pleased, also, to note that in October, Ithmaar Bank through Faysal Bank Limited marked thirty years of operations in Pakistan. This is a significant milestone in our history,” he said.
Ithmaar Bank first commenced its operations in Pakistan in October 1987 under its initial predecessor, Faysal Islamic Bank of Bahrain.
“As a monetary measure, the Government of Pakistan has, for many years, deliberately kept benchmark rates at low levels. This has significantly affected returns on financing and investments, and restricted the earning capacity of banks due to margin compression. The Bank has realigned its strategy to these economic realities, and is focusing on mobilising low-cost deposits and rationalising administrative expenses,” he said.
“Strict credit monitoring and aggressive follow up on delinquent clients led to major recoveries,” said Abdul Rahim. “The Bank intends to maintain growth momentum through Human Resource development, enhancing products line and upgrading core banking software. FBL continues to increase its core deposit base and enhance its financing book with primary focus on SME (Small and Medium Enterprises) and Consumer Finance. The Bank is also actively pursuing syndicated financing and advisory business and has undertaken several major projects independently and jointly during the said period,” he said.
“FBL has been making steady growth for years and has now consolidated its position in the Pakistan’s banking sector,” said Abdul Rahim. “The Bank’s footprint now extends to 376 branches in more than 100 cities across Pakistan after having added almost 30 branches during the year. The Bank aims to have expanded its retail banking network by 50 during 2017 to reach 404 branches by the end of 2017. The Bank’s deposits have reached US$3.4 billion and assets have crossed the US$4.5 billion mark with a capital base of more than US$310 million,” he said.
FBL’s financial performance has earned the Bank “AA” and “A1+” ratings for the long and short terms respectively, with stable outlook from JCR-VIS Credit Rating Company Limited and Pakistan Credit Rating Agency Limited.