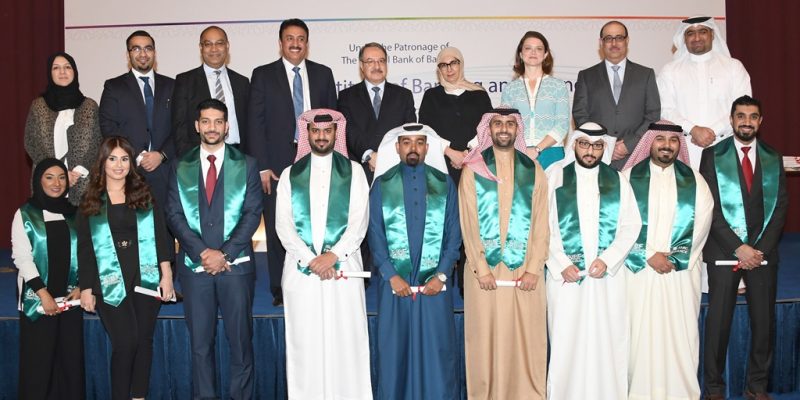 MANAMA, BAHRAIN – 11 June 2017 – Ten employees at Ithmaar Bank, a Bahrain-based Islamic retail bank, who recently earned professional certificates in Islamic finance from the Bahrain Institute of Banking and Finance (BIBF) were honoured at a ceremony hosted by the BIBF and attended by Ithmaar Bank Chief Executive Officer, Ahmed Abdul Rahim, Assistant General Manager, Head of Retail Banking, Mohammed Janahi, Executive Senior Manager, Head of Commercial and Financial Institutions, Abdulla Talib and employees from the Human Resources Department.
The employees, from various departments including Commercial and Financial Institutions, Retail Banking, Product Development and Management, and Compliance & Anti Money Laundering had successfully completed professional training programme at the BIBF and earned the Advanced Diploma in Islamic Finance.
Abdul Rahim congratulated the employees on their achievements which, he said, helped contribute directly to developing the Islamic banking and finance industry both in Bahrain and abroad.
“Banking is all about people,” said Abdul Rahim. “At Ithmaar Bank, we have long recognised our people as our greatest asset and we have repeatedly stressed that our continued success is, ultimately, dependent on our people,” he said.
“As a pioneered Islamic Bank, Ithmaar is committed to playing a key role in the development of the Islamic banking industry,” said Abdul Rahim. “One way we try to do so is by focusing on improving the qualifications and skills of our employees. This, in return, will reflect on the Bank’s performance, particularly in terms of delivering on our customers’ expectations and will in turn enhance the skill set in Islamic banking sector in the Kingdom,” he said.
“At Ithmaar Bank, we are working continuously to develop our employees who are the pillars for our success,” said Ithmaar Bank Head of Human Resources, Enas Rahimi. “We always look for training programmes that will help our workforce gain new professional skills and knowledge in Islamic banking,” she said.
“We also try to encourage our employees to join professional training programmes such as the Advanced Diploma in Islamic Finance,” said Rahimi. “These will help enhance their experience and add to their qualification which, in turn, will help their careers,” she said.
The following employees earned the Advanced Diploma in Islamic Finance Certificate: Ali Abbas Faraj Abbas, Ali Yusuf Ali Abdulwahab Jamaan, Khalil Ebrahim Mohammed Qabeel, Mohammed Abdulaziz Salman Al-Hasan, Muhjah Abdulrazaq Abdulla Fulad, Mohammed Abdulla Mohamed
Al-Awadhi, Yousif Mohammed Abdulla Al-Qasim, Faisal Riyadh Yusuf Sater, Naser Abdulla Naser Al-Naqib and Mai Abdulhameed Mohammed Al-Thawadi.
-ENDS-