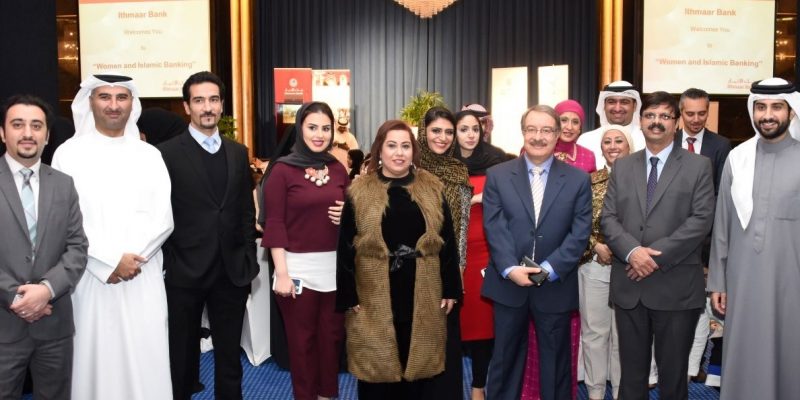 MANAMA, BAHRAIN – 24 January, 2016 – Ithmaar Bank, a Bahrain-based Islamic retail bank, sponsored the Bahrain Businesswomen’s Society’s annual gala dinner, held as part of the year-long Bahraini Women’s Day celebrations, which centre around the role of women in banking and finance.
The event honoured 20 women for their outstanding professional contributions to the sector over the years. They were presented with awards by Society President Ahlam Janahi in the presence of Ithmaar Bank Chief Executive Officer, Ahmed Abdul Rahim; Chief Operating Officer, Ravindra Khot; Head of Private Banking, Rafed Al-Mannai; Head of Business Development Unit, Fayza Hasan; Head of Human Capital, Enas Rahimi; other bank employees, society members and guests.
Speaking at the event, Abdul Rahim paid tribute to the role women have played in the development of Bahrain’s business sector since its inception.
“Ithmaar Bank is delighted to have the opportunity to sponsor this event which honours women who have made substantial contributions to our industry,” said Abdul Rahim “We view working towards furthering the empowerment of women as one of our responsibilities as a pioneering Islamic bank, and, in line with this, are supporting this national project of the Supreme Council for Women (SCW) and the Central Bank of Bahrain (CBB),” he said.
“Our institution has long valued the role of female employees, who we consider to be equal partners in our organization. Our merit-based policies give equal opportunities for growth to all our employees, regardless of gender or background, cultivating a culture that is focused on high performance,” said Abdul Rahim. “Women play important roles throughout our institution as members of staff and management, and even at the board of directors level. Our success would not be possible without their contributions,” he said.
“The Bahrain Businesswomen’s Society hosts such events to honour professional women working in important sectors such as banking and finance, and to encourage them to succeed and further contribute to the national economy,” said Janahi. “ Marking Bahraini Women’s Day, this event is also being held in support of the initiative of Her Royal Highness Princess Sabeeka bint Ibrahim Al Khalifa, Wife of His Majesty the King and President of the SCW, who is patronising the year-long celebration of the role of women the in banking and finance sector,” she said.
The Bahrain Businesswomen’s Society was established to promote business and networking opportunities among Bahrain’s businesswomen, as well as to support their commercial, economic, investment and development contributions to the Kingdom. It also works to encourage their continued participation in social programmes and other development initiatives.