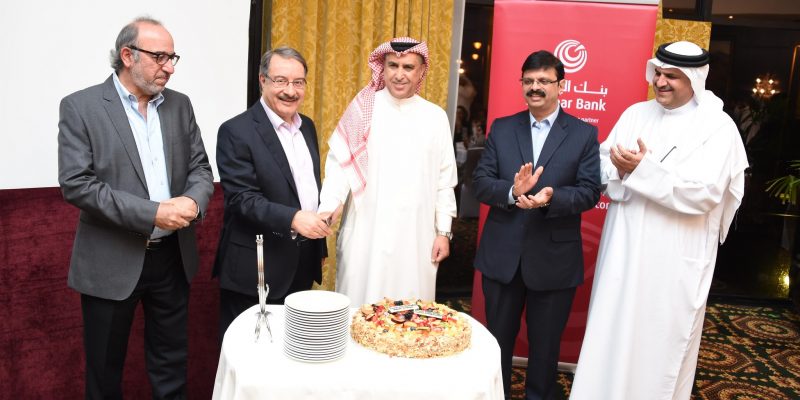 05 Jun 2016
MANAMA, BAHRAIN – 5 June 2016 – Ithmaar Bank, a Bahrain-based Islamic retail bank, held an honouring ceremony and farewell dinner for its outgoing General Manager – Banking Operations, Information Technology and Administration, Abdulrahman Mohamed Ahmed Al-Shaikh, who retired after more than 42 years of service in the banking industry.
The event, which was hosted by the Ithmaar Bank Chief Executive Officer, Ahmed Abdul Rahim at the Ritz Carlton, was attended by Chief Operating Officer, Ravindra Khot, General Manager, Banking Group, Abdul Hakeem Al Mutawa, Assistant General Manager, Information Technology, Yousif Al Khan and other management and staff.
During the ceremony, Abdul Rahim thanked Al Shaikh for his commitment, dedication and valuable contributions over the past 25 years to Ithmaar.
“Abdulrahman contributions have, over the years, played a major role in the continuous improvement of the Bank’s performance,” said Abdul Rahim. “Throughout his long career, he remained absolutely committed to excellence and his dedication translated to tangible results and high efficiency. In particular, Abdulrahman held himself to exceptionally high moral standards and, throughout his career, brought high levels of integrity to the various departments he managed,” he said.
Khot, Al Mutawa and Al Khan also delivered brief speeches thanking Al Shaikh for his contributions, sharing some of their memories working with him, and wishing him an enjoyable retirement.
For his part, Al Shaikh said he will miss working with his colleagues, and wishing them all continued success in their work.
“I joined the group in 1991 and, throughout these many years, the group became my second family,” said Al Shaikh. “It was a privilege and an honour, and I am grateful for the many fond memories I will be taking with me,” he said.