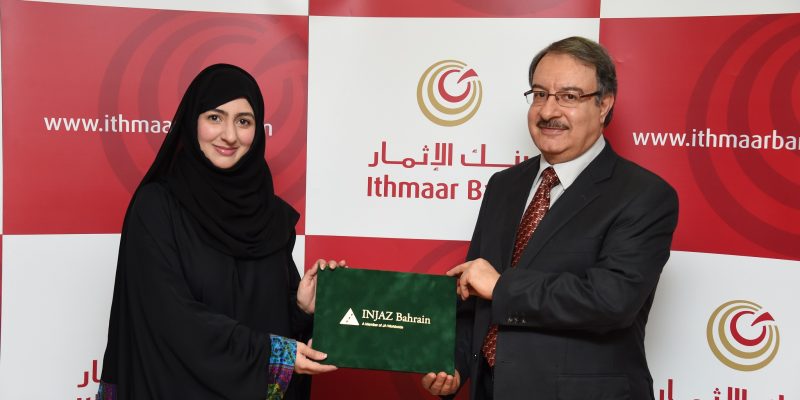 MANAMA, BAHRAIN – 17 FEBRUARY 2016: Ithmaar Bank, a Bahrain-based Islamic retail bank, honoured its Head of Human Resources, Enas Mohammed Rahimi, for having completed ten consecutive years of volunteer service with INJAZ Bahrain, as well as for her championship of youth empowerment, both personally and in her professional capacity at the Bank.
Rahimi is passionate about her volunteer work, especially with INJAZ Bahrain for which she has been a volunteer almost since its inception 11 years ago. She also actively encourages her colleagues at Ithmaar Bank to contribute to the organisation’s various youth leadership initiatives. Rahimi was congratulated by Ithmaar Bank Chief Executive Officer, Ahmed Abdul Rahim, who praised her contributions both to the Bank and to the Kingdom of Bahrain’s youth. INJAZ had earlier hosted an honouring ceremony for Enas as well as other long-term volunteers.
“With over ten years of committed volunteer service behind her, Enas has established herself as a true champion of youth empowerment in Bahrain, and we at Ithmaar Bank are all extremely proud of her accomplishments,” said Abdul Rahim. “As a pioneering Bahraini Islamic bank, we have always been a major supporter of women and youth empowerment, and Enas’s efforts are firmly in line with these values. We are also grateful to her for setting such a great example for our other employees to follow,” he said.
Rahimi said she believes that efforts to help young people realise their full potential are vital to the continued development of Bahraini society.
“Initiatives like INJAZ Bahrain offer the right environment and tools to help inspire students and allow them to think creatively,” said Rahimi. “The training we provide prepares them to become society’s future leaders, and I am very happy to be able to play a small part in shaping their lives and future successes,” she said.
INJAZ Bahrain is a non-profit organisation that was established in 2005 as part of Junior Achievement Worldwide with the aim of empowering young people to own their economic successes and be prepared for today’s business challenges. With the help of its partners and volunteers, INJAZ Bahrain impacts thousands of students every year, bringing them closer to the real world and opening their minds to their own potential.