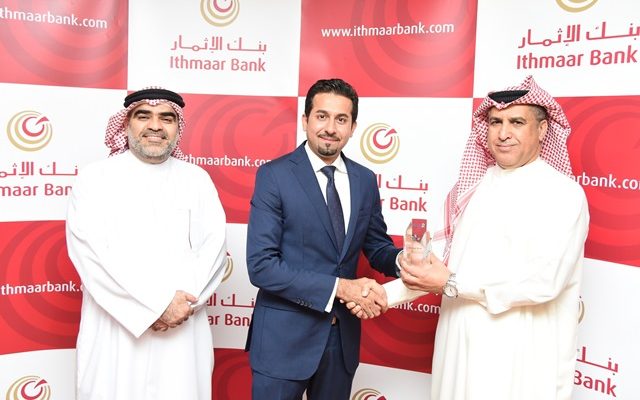 28 Jun 2015
MANAMA, BAHRAIN – 28 June 2015 –Ithmaar Bank, a Bahrain-based Islamic retail bank, achieved exceptional operational efficiency in 2014 to earn a prestigious Excellence Award from Standard Chartered Bank.
Ithmaar Bank, which achieved 94.5 percent efficiency in the execution of electronic payments during 2014, received the Straight Through Processing (STP) Excellence Award at a ceremony held at the Bank’s Seef Headquarters. The Award was presented to the Ithmaar Bank General Manager, Head of Banking Operations, Information Technology and Administration, Abdulrahman Al Shaikh, by the Standard Chartered Director of Financial Institutions – Transaction Banking, Hassan Qambar.
Qambar congratulated Ithmaar Bank, and wished the Bank continued success. “This award is evidence of Ithmaar Bank’s operational excellence,” said Qambar. “We are delighted to partner with an institution of such calibre,” he said.
“Ithmaar Bank is committed to becoming the Islamic bank of choice,” said Al Shaikh. “To do so, we focus on enhancing our customer’s satisfaction by continuously improving our products and services, as well as our transaction processing,” he said.
“This award confirms that our efforts are paying off,” said Al Shaikh. “It is an achievement that demonstrates our operational efficiency, and it was made possible by the commitment, dedication and expertise of Ithmaar Bank’s Operations Team,” he said.