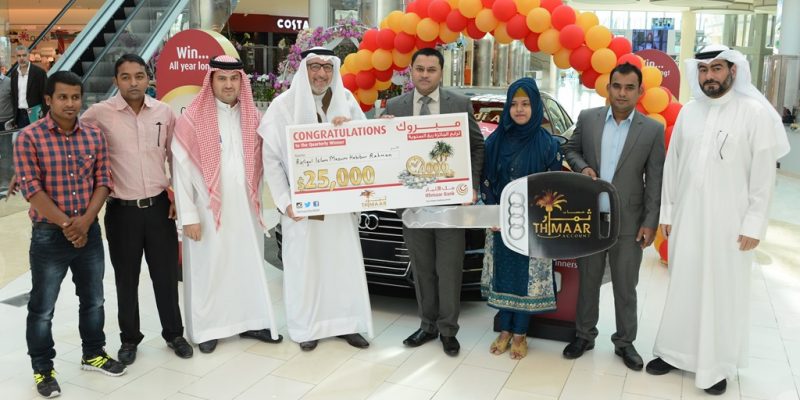 MANAMA, BAHRAIN – 11 January 2017: Ithmaar Bank customer who participated in Ithmaar Bank’s prize-based saving account Thimaar was presented with a luxury car and US$25,000 in prize money winning the latest quarterly prize.
Thimaar was introduced by Ithmaar Bank, a Bahrain-based Islamic retail bank, to encourage a more responsible saving pattern by offering prize-linked incentives alongside anticipated profits to the customers. Every year since its launch almost six years ago, Thimaar has been revised to include new prize schemes and, during 2016, Ithmaar Bank distributed 4,000 prizes totalling US$2.3 million.
The latest Thimaar prize, an Audi A6 and US$25,000 in prize money, was awarded to Rafiqul Islam Masum Habibur Rahman, a Bangladeshi national, who won the fourth quarterly Thimaar prize following a draw on 5 January that was supervised by representatives from the Ministry of Industry, Commerce and Tourism, external supervisors, Key Point, and the Bank’s own internal auditors.
The prize was presented at a ceremony held at Seef Mall and attended by Ithmaar Bank General Manager, Banking Group, Abdul Hakeem Al Mutawa and other senior officials from the Bank. Ithmaar Bank also announced 187 other Thimaar winners following the draw, including a US$10,000 monthly prize winner, 93 US$1,000 Thimaar winners, and 93 US$200 Thimaar Junior winners.
Thirty-two year old Rahman said this is the biggest prize he has ever won, and that becoming a Thimaar winner could significantly improve his life.
“Winning a luxury car as well as thousands of dollars at the same time is a really big deal for anyone, particularly me,” said Rahman. “Although this was, obviously, something I had always hoped for, it was not something I really expected and I am not sure what I will do with the prize yet,” he said.
“It is the first time I win a Thimaar prize and I feel really blessed to have won such a large one. I am sure will help me in many different ways,” said Rahman. “I would not have won if I had not participated, and I am really glad I decided to start saving with Ithmaar Bank. In fact, I will encourage my family and friends to save with Thimaar,” he said.
Al Mutawa congratulated Rahman and all Thimaar prize winners, and wished them all continued success.
“It is always such a delight to present Thimaar winners with their prizes,” said Al Mutawa. “The prizes, which reward responsible savings, often have significant effects on the winners’ lives and we are truly pleased to be part of that experience,” he said.
“Ithmaar Bank is committed to becoming the Islamic retail bank of choice in Bahrain,” said Al Mutawa. “To do so, we work towards continuously enhancing our customers’ Islamic banking experience as well as on continuously developing our products and services,” he said.
In its current format, Thimaar provided US$3,600 in daily prizes, one US$10,000 monthly prize, four car and cash quarterly prizes totalling US$300,000, and US$600,000 in Eid prizes. Every BD50 maintained as an average daily balance qualifies a customer to enter the draws. The more customers save, and the longer they maintain balances in multiples of BD50, the more opportunities they have to win.
The full list of winners is available at www.ithmaarbank.com/thimaar