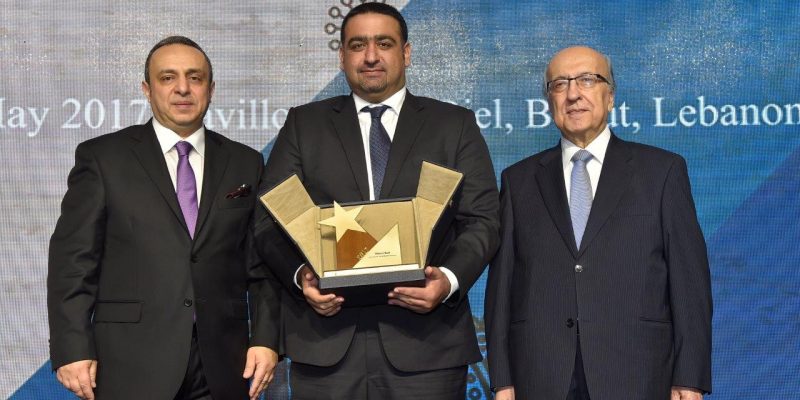 MANAMA, BAHRAIN – 11 December 2017 – Ithmaar Bank, a Bahrain-based Islamic retail bank, was honoured at a ceremony attended by senior bankers from across the Middle East after it was named Best Islamic Retail Bank in Bahrain.
Ithmaar Bank was presented the prestigious award following a comprehensive selection and review process conducted by a committee of high-level economists and banking professionals, as well the research department of the Union of Arab Banks and the World Union of Arab Bankers. The award was received on behalf of the Ithmaar Bank Chief Executive Officer, Ahmed Abdul Rahim, by the Ithmaar Bank Head of Commercial and Financial Institutions, Abdulla Talib.
“Ithmaar Bank is committed to becoming the region’s premier Islamic retail bank,” said Abdul Rahim. “This is a commitment we take very seriously, and I am pleased to note that our efforts in this direction are being noticed, recognised and celebrated at a regional level,” he said.
“Winning this award is testimony to the fact that the vision spelled out by the Ithmaar Bank Board of Directors, led by the Chairman His Royal Highness Prince Amr Al Faisal, is being translated into a tangible reality,” said Abdul Rahim. “It is significant achievement by any measure, and is a result of the commitment, dedication and expertise of our employees,” he said.
“Enhanced customer satisfaction, as well as the subsequent growth of our core retail banking business, is great reward in itself and I am confident that the recognition will help inspire us to even greater achievements,” said Abdul Rahim. “This, in turn, will help further reinforce Bahrain’s position as a key banking and finance hub in the region,” he said.
Wissam Fattouh, Secretary General, World Union of Arab Bankers (WUAB) and Union of Arab Banks (UAB) congratulated Ithmaar Bank on winning the award and wished the Bank continued success.
“The Arab Banking Awards celebrates achievements of excellence across the Arab Banking sector,” said Fattouh. “Winning the Best Islamic Retail Bank in the Bahrain category is testimony to Ithmaar Bank’s reputation for excellence, and we congratulate them on this major achievement,” he said.
“Ithmaar Bank was selected as the Best Islamic Retail Bank in Bahrain by a high level committee of economists and bankers, as well as the WUAB and UAB research teams,” said Fattouh. “It is a great achievement and a powerful testimony to the Bank’s remarkable success,” he said.
The World Union of Arab Bankers (WUAB) is a prominent Arab Forum that is patronized by Arab leaders of economics and finance, as well as influential banking pioneers, top experts, successful businessmen, remarkable professionals and brilliant entrepreneurs. WUAB, a sister organization of the Union of Arab Banks (UAB), is a non-profit, non-governmental organization that enjoys the privileges, immunities and exemptions extended to regional and international organizations operating under the Arab League. The UAB enjoys full financial, administrative and organizational autonomy. It is considered the true representative of the Arab banking and financial community, and the major supporter to Arab banks and financial institutions as well as the Arab mutual banking institutions.