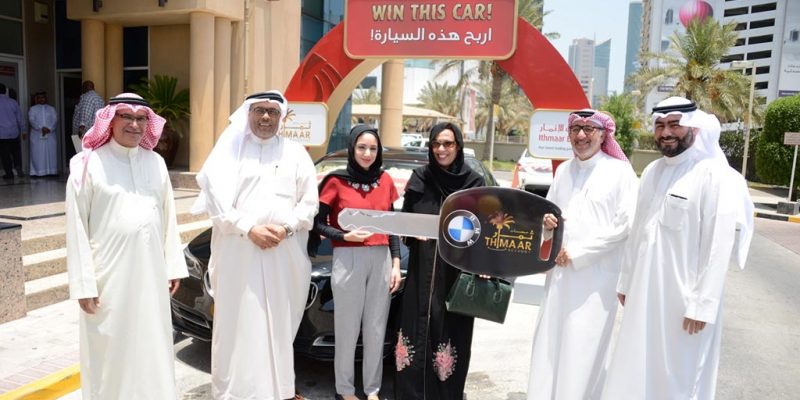 Thimaar, Ithmaar Bank’s prize-based saving account, offers various types of luxury cars and multiple cash prizes alongside anticipated profits to help encourage people to save. In addition to the Quarterly prize, Ithmaar Bank also announced 936 winners of Eid prizes as well as 181 winners of the June daily and monthly prizes following draws that were supervised by representatives from the Ministry of Industry, Commerce and Tourism, external supervisors, Key Point, and the Bank’s own internal auditors. In total, more than one thousand prizes were distributed to Thimaar account holders by the end of the second quarter of 2016.

“I am delighted to win the Thimaar second quarterly prize,” said Shaikha Fatima who used to be a lecturer at the University of Bahrain’s College of Education. “This is the first time I win a grand prize from Ithmaar,” she said.
“I have been a long-term Ithmaar Bank customer and have been banking here since it was first established,” said Shaikha Fatima. “I’ve always encouraged my mother as well as my family and friends to save money with Thimaar as it always offers special prizes. I particularly liked the new Thimaar scheme that was launched earlier this year as it has increased the number of winners giving us more chances to win,” she said.

Al Mutawa congratulated Shaikha Fatima and all Ithmaar prize winners, and wished them all continued success.

“It is always a pleasure to announce the latest Thimaar winners, and even more so to present them their prizes,” said Al Mutawa. “Thimaar, now in its sixth year, is designed to offer both luxury cars and multiple cash prizes to help us bring joy and happiness to more Thimaar accountholders,” he said.

“Ithmaar Bank is committed to continuously improving its products and services, as well as to listening carefully to its customers’ demands and requirements,” said Al Mutawa. “This, we believe, will help us remain the Islamic retail bank of choice among the people of Bahrain,” he said.

The Thimaar savings account was launched with a new prize scheme earlier this year offering customers 4,000 prizes totalling US$2.3 million throughout the year. Thimaar provides various prizes including US$3,600 in daily prizes, one US$10,000 monthly prize, four luxury car and cash quarterly prizes totalling US$300,000, and US$600,000 in Eid prizes. Every BD50 maintained as an average daily balance qualifies a customer to enter the draws. The more customers save, and the longer they maintain balances in multiples of BD50, the more opportunities they have to win.