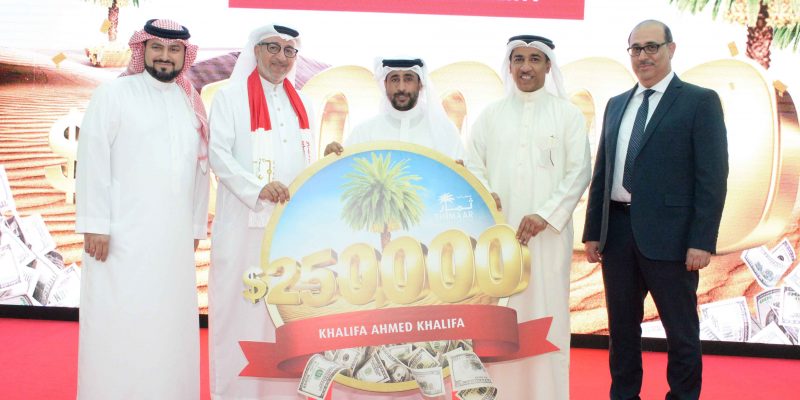 MANAMA, BAHRAIN – 18 November 2018 – Khalifa Mohamed Khalifa, a retired Bahraini, took home a US$250,000 cash prize after becoming the third grand prize winner of a Thimaar draw this year from Ithmaar Bank, a Bahrain-based Islamic retail bank.
Thimaar, a prize-based savings account, rewards Ithmaar Bank customers who save using the account with a chance to win up to 4,015 prizes totalling US$3,170,000 throughout the year.
The US$250,000 cash prize was presented by Ithmaar Bank Deputy Chief Executive Officer – Banking Group, Abdulhakeem Al Mutawa, at a ceremony held at the Seef Mall and attended by other Thimaar winners, as well as Ithmaar Bank Assistant General Manager – Head of Retail Banking, Mohammed Janahi, and other members of the Ithmaar Bank management team.
“We are delighted to win the grand prize of Thimaar,” said Ahmed Khalifa- the winner’s son. “I have received a call from the Bank on behalf of my father stating that he has won the grand prize. At first, I thought it was a joke as I have a good relation with the Bank’s employees. Then the branch manager confirmed it’s true,” he said. “I would like to thank the Bank for offering its customers such a high chance of winning these valuable prizes. We will continue to save with Thimaar savings accounts as they offer many cash prizes and also encourage people to get into the habit of saving.”
“On behalf of Ithmaar Bank, I would like to congratulate Khalifa and his family, and all the other Thimaar winners,” said Al Mutawa. “We are pleased to be able to bring so much joy and prosperity to so many families in Bahrain. The Thimaar scheme, now in its eighth year, offers the highest chances of winning of any comparable product in Bahrain, which is an extremely attractive prospect for savers,” he said.
In 2018, Thimaar offers its Thimaar account holders 4,015 prizes – one of the highest by any bank in Bahrain. Ithmaar Bank also increased the total prize purse to US$3,170,000, including three grand prizes of US$250,000 each, making it one of the largest to be won in the Kingdom.
Every BD30 maintained as an average monthly balance qualifies a customer to enter the draws. The more customers save, and the longer they maintain balances in multiples of BD30, the more opportunities they have to win.